A labyrinth defers from a maze in the singularity of path. In a maze you can get lost because it is a branching puzzle with choices of path and direction. A labyrinth, on the other hand, only has a single path. I bought a book in July 2010 entitled Labyrinth by Brian Draper. I got to know about the book via a tweet by Ian Aspin (@IanAspin), a man who I got to know and respect on twitter, following his re-tweet of my defence of the NHS. The book spoke to me personally, especially in relation to the journey I was making. My journey did not feel like a maze, it felt (and still feels) like a labyrinth. Brian signed the book:

I have reached a significant junction in my journey and wish to mark it with this post. The aim is to pool together what has happened, my honest thoughts about these events and offer a way forward. You could say I am yielding to the advise of Dr Ed Kessler, who in his inaugural ‘Thought for the Day“, observed that:

No one should surrender to the night. The proper response is not to curse the darkness but to light a candle.

I am going to use this post to light a candle. This has after all, been the purpose of my journey thus far. In my narrative of ‘The Doctrine of Universal Truths‘, I observed that:

If the universal truths are the candle then a good narrative can be a way of reflecting the light and, by consequence, spreading it – page 16 – The Doctrine of Universal Truths by Kazeem Olalekan

The Iforg vision has been very clear from the start. I am posting below a podcast produced in November 2007 and presented by Kate Penhaligon. It states how, at Iforg, technology will be used to enhance healthcare and also eluded to a blog written in May 2007 entitled: The Power of Observation. It described how observation will be at heart of our productivity enhancement at Iforg.

In this labyrinth that has been my life till now, my mind is filled with wonder. My unfolding story has been that of  ‘humanity, spirituality, theology, quest, belief, wonder, doubt, penitence, journey…’ (from Labyrith by Brian Draper). To illustrate this, I will share with you a personal picture, which encapsulates the narrative I am trying to impart. Picture 1 below is a picture of myself taken by friends (Mark & Elizabeth) in my first year in the UK. It was taken at Victoria Embankment Gardens in London sometime between 1991 and 1992. 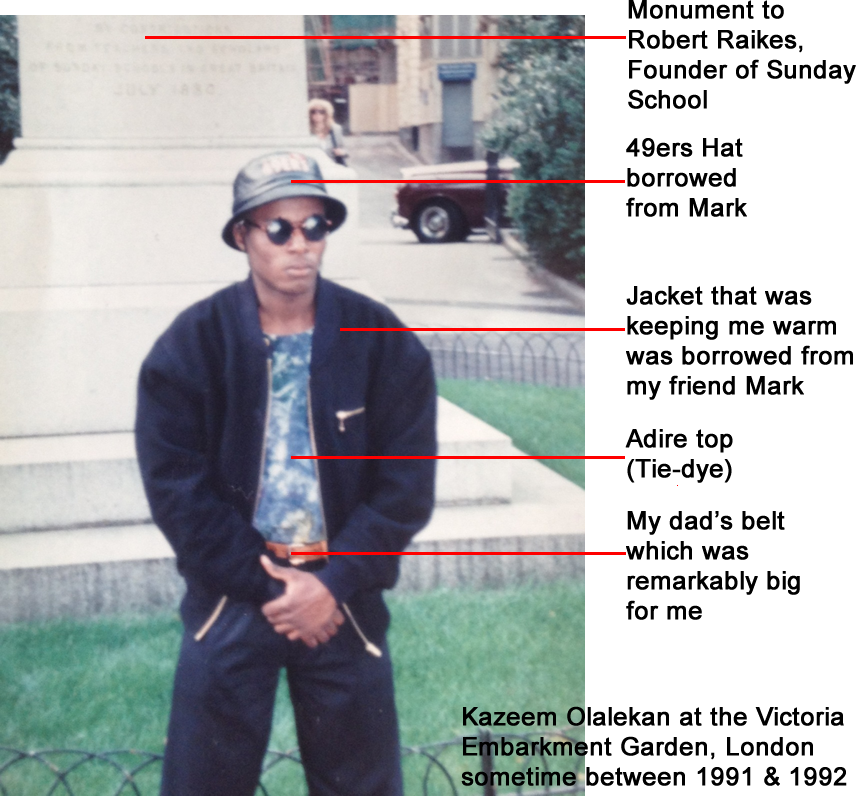 I find this picture remarkable for a number of reasons. This was the period of time when I was tentatively feeling my way around in a brave new world. In spite of what I consider to be four grey walls that surrounded me, I still had fun with my friends. It is also remarkable that I posed by the statue of Robert Raikes, an English philanthropist and Anglican layman noted for initiating the Sunday school movement. It was not deliberate, but on reflection, it now makes sense. In the main section of that garden, there are many memorials: Sir Arthur Sullivan, Robert Burns, Sir Wilfred Lawson, and the Imperial Camel Corps but I posed by the statue of Robert Raikes. What might seem like a senseless observation now makes perfect sense to me. What was also remarkable with the picture is that the vast majority of what I am wearing was borrowed and they says something about me. The 49ers hat and the coat that was keeping me warm was borrowed from my dear friend, Mark. How astonishing! The San Francisco 49ers are a professional American football team which my friend clearly supported. I knew very little then about American football but looking back now, the role America has played in giving me a platform to express myself cannot be overemphasised. This happened at a point when I felt a concerted effort to muffle my voice. Whilst in the garden of Victoria, it is important to know that I am wearing an Adire (Tie-dye) top which is a well recognised craft of my home town in Abeokuta, Ogun State, Nigeria. The particular one I was wearing in the picture was sent to me from Abeokuta by my mother. The belt I am wearing in the picture belonged to my father and was a little big for me. The point here is that the picture you see before you is a combination of where I came from, where I am and how I got here. It is a journey about something old, something new and something borrowed. I also stand by the Sunday school tradition and everything that follows from there. It is who I am.

This is a picture that tells a million stories about me.

“Why are you wasting your time writing this?” You might ask. I want to light a candle. I want to express, without ambiguity, what I really feel and think without fear or favour. My motivation for starting the pharmacy project was selfless and selfish. It was selfless because I wanted to support a project which most of my colleagues were antagonising but I felt was having positive impact on my patients. What would have been the most sensible thing to do was to say: ‘Hey, I have a financial problem of my own…let the leaders go figure it out for themselves’. I didn’t. I however, did not rush into it. I waited two years into the introduction of MUR and in the face of continued opposition, I acted because I believed it was the right thing to do. It was a selfish act because I wanted to benefit from taking the risk. It was my growth strategy for getting out my financial mess. Faced with what I considered to be strong opposition to my actions, I decided to do what I thought was best…walk away. I neither have the resources nor the inclination to do battle with the powerful forces that was conspiring against me. My family will come first.

The act of walking away was the same as me trying to find myself a new growth strategy. What happened next is detailed in ‘The Doctrine of Universal Truths‘. In the end, I was instructed clearly to stay in the fight. I did and that is why I am here today.

I have always trusted people in authority to do the right thing. I still do and it is engrained into my DNA. I also know that in this journey through the labyrinth, there will be people that share your goals and others that wish you to trip up. This never bothered me. My instructions were clear enough. I was complicit because the task was far from done and because I understand the economic challenges the country was facing. I also wanted to test the validity of what I was going through and prove that I was not going mad. I thought, naively perhaps, that when I have proved my worth, the financial albatross will disappear. However, every time I prove the doubters wrong, the reality changed. It became a game of  cat and mouse which only serve as a distraction from what God is calling me to do. They (and I don’t quite know who they are) always come up with another sets of explanations to justify lack of recognition.  The recognition is not an end in itself. It is a means to an end. The end being the ability to continue my mission. The aim is to contribute to a body of knowledge that will advance our race.

The reality I am confronted with is this: taking risk and promoting innovation is fruitless. This is clearly not entirely true but it is true mostly. Faced with such a reality, the question is why bother? I am neither able nor willing to proceed in those terms. Everything that happened is now shrouded in an almighty secrecy! I either made a difference (with a big help from my God) or I didn’t. I need to know.

My fear, when my moment of truth came was how vivid it was. I was also afraid that there can be no difference in someone who wakes up one day and believed that his mission was to kill another man. They are opposite sides of the same coin. That is a stark reality which Professor James Fallon, an American neuroscientist, discovered for himself. That was a big part in my complicity. I was either going mad, Divinely Ordained or just someone who saw that something was wrong and wanted to help fix it! I see myself as that someone who was trying to help fix what was wrong. Anyone can be that someone if they choose to. That was why I slowed down. It turned out I wasn’t mad after all and I certainly wasn’t Divinely Ordained. Our system of secrecy (the magnitude of which is emerging from Snowden and his likes) are conspiring to alienate a great deal of good people who sense things differently. These acute senses are finely honed in some better than others but it can be thought. Because it can be thought, it can also be abused. That is why I guard it carefully. I am still not sure who is watching. The result for me is the existence of this wall that I feel around me. Clearly it has turned into a game of who could maximise the benefit from it. It is not for anyone to take but it is for me to give. If I am giving, I need to be sure to whom.

It is clear to me in any case, that the culture of deniability is pervasive when we are unsure what we are dealing with.  I understand this. That was why I risked everything to prove the cancer inherent in our system. I do not wish to be judged by what I say or feel. I want to be judged by what I do. If after risking everything (and being watched), I am proved right, then the least I would expect is to be recognised for it so that I can move on. That is only fair in a fair society. Why? Watching for reasons other than security and to inform good practice, complicates things and demoralises business growth because of too many vested interests. If recognition is not possible in what we call our open society, then please get off my case! I will not play fodder to any political shenanigan. So I will paraphrase the former president of the United States of America:

The destination I visualise is a great one. Yes, I am just as selfish as you…I just like to take as many of my friends and patients along as will choose to come. Tear this wall down, Mr Gorbachev, by telling your truth not cloaking  it in some official secrets act!